The New Black Panther Party Marched At Stone Mountain Today 7-4-2020 - But Who Are They? 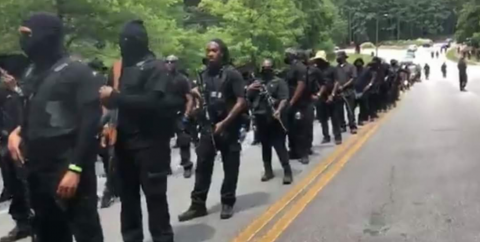 After saying their oath to the "Black Nation", which includes language to defend it from Jews and Whites, they marched supposedly in a "peaceful" fashion.

However, that is only what the left biased media reported.  The truth is more complicated than that.  There were multiple confrontations between the members of the march, who mostly were dressed from head to toe in pro-military garb, with many having their faces fully covered.  Most all of them carried either AK-47 or AR-15 rifles and other weapons.  Since 2009, this had been allowed in Stone Mountain Park, after a lawsuit was brought against the park in 2008 and settled in 2009, allowing lawful gun owners to carry in the park.

Some of the confrontations at the park were not peaceful as described by the lying media.  One such incident included one white man in his car, where the protesters told him, "We're not BLM or any of that bullshit.  We are your worst nightmare, you'd better move along..."

If you are a Facebook member, you can see the video of that incident here:

Does that sound peaceful to you?

Or how about their opening oath they all said out loud?

The New Black Panther Party is a virulently racist and antisemitic organization whose leaders have encouraged violence against whites, Jews and law enforcement officers

But yes, let's describe them as peaceful.

Protect Americans on Facebook Watch
BREAKING: Armed Black “peaceful protestors” are harassing white civilians at Stone Mountain If this was white people it would be national news and...