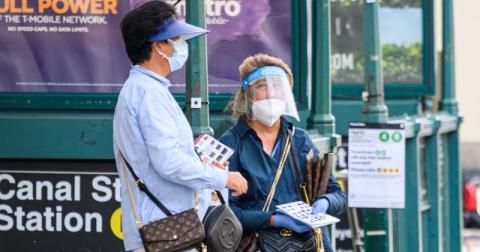 Liberalism is a disease of the mind. No two ways about it.

Seriously?  30 million dead?  That's what the average American believes?  That would mean 1 out of ever 11 people you know, would be dead from Covid-19.

Personally, I probably know a 1000 people within 2 degrees of separation.  In my case, that would mean that I should know of around 90 dead from Covid-19 if the 30 million number was real.

I know of 3 and I think for most people, other than nurses and doctors, that's a high number.  Most people don't know anyone that has died from Covid-19.

Hell, I don't know of a single person that has died from the flu, yet we supposedly have 50,000 dead on average every year from the flu.

Well, I guess all of my conservative friends must be way above average then as we believe about 160,000 have died, and we believe that number is much higher than the truth as the CDC has admitted to lumping pneumonia and other causes of death into the mix.

There is a huge lie out there about Covid-19.

We won't know the truth until after the November election, if ever.

Most likely, the disease will all of a sudden disappear and no one will question the narrative, just like all of the other crazy shit that has happened since Donald Trump, our 45th president, was elected.

Remember Nancy Pelosi's own words, "We'll do whatever it takes to remove him from office...."