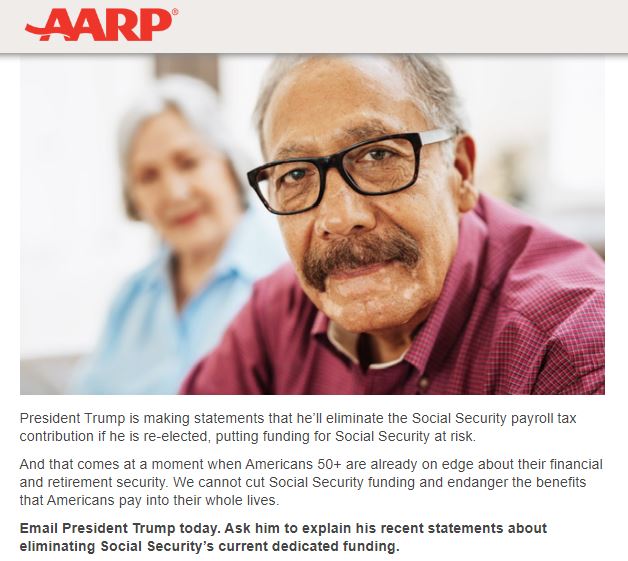 Received this from AARP in an email today.

Will you do whatever it takes to protect Social Security, too?

Already, 119,524 AARP advocates did just that when they asked President Trump to clarify his statements about eliminating Social Security’s source of long-term funding, the payroll tax contribution.

This raises serious questions about the future of the program. President Trump already signed an executive order designed to suspend payroll taxes through the end of the year. And he said, if re-elected he would terminate the payroll tax. The Social Security Administration chief actuary said that if the payroll tax funding is not replaced, it would deplete Social Security’s trust fund by 2023, “with no ability to pay benefits thereafter.”

Read that again.  Social Security would be 100% depleted by 2023, if no one pays into the system for the next 18 months.

How good are you at math?

This is akin to a Ponzi scheme.

AARP tries to blame Trump.  Obviously they are a democrat/left/liberal company.  How is decades of mismanagement and theft from the fund the fault of a president who's been in office for only 3.5 years?  Explain that one to us, Mr. Social Security Administration Chief Actuary.

More likely, you can blame career politicians like Biden, Pelosi and Schumer.

2nd, Social Security is a pot of money, for lack of a better term, that is supposed to hold all of our hard earned contributions, collect interest and be paid back at retirement so that we can live off of it.

If millions have paid in for decades, and now, all of a sudden, if no one pays in for the next 18 months, it's all gone?  So anyone retiring in 2023 or beyond, their money is no longer in the fund?  Is that what they are telling us?

They lost it?  Misplaced it?

No, they stole it by paying benefits to illegal aliens who never paid a dime in.  They raided the fund, over and over again, leaving markers behind they never planned to pay back.

Here is my response to their attempt to have me write a complaint to President Trump and to have me blame him the failures of decades of theft and mismanagement by these rotten scoundrels.

Title: President Trump, please explain how you will protect Social Security's funding by undoing decades of theft by career politicians

AARP reports that a Social Security Administration Actuary states, that if the payroll tax is not paid into the fund over the next 18 months, Social Security will be insolvent by 2023.

What AARP is not reporting, is that this fact has actually no bearing on anyone that has already paid into the system and is just waiting to collect.

Unless of course, they are admitting that Social Security is the biggest Ponzi Scheme scam every invented.

Not only have career politicians like BIden, Pelosi and Schumer, raided the fund for decades with no plan to ever pay back their markers, they also paid billions to illegal aliens who never paid a dime into the system to begin with.

Where and when will it end?  I am ok with you ending the payroll tax and allowing us to keep our money to invest where we see fit.

When will someone honest finally come clean about the truth and the mess that Social Security really is?

Mr. President, I voted you in, and you have done an incredible job.  The lefts constant attacks on you, are a testament that you are doing the right things.  They are afraid that you will lay bare all of their decades of incompetence and the theft of America's treasury of which they are all so guilty of.

Please help us regain control of our treasury, our government, our country and ultimately our Republic.